Survival of the fittest, not fastest, at SailFest

It was 50 shades of grey skies in the morning and mission (almost) impossible in the afternoon as a torrential downpour made way for a 30-knot nor’wester at Day 2 of SailFest Newcastle, giving off-the-beach and match-racing crews some rides to remember.

Principal Race Officer Denis Thompson was forced to cancel TP52 and IRC/PHS racing for the day after the Bureau of Meteorology issued a gale warning for Hunter coastal waters.

The modified race format, hastily assembled by Race Officer Ian Humphries, comprised a series of knockout rounds with the winning two boats going through to a final. You’d swear they were rental cars, so willing was the action as first the sun came out then the breeze filled in.

Spectators at Honeysuckle Hotel, many clutching a cool ale, cheered the intense windward-leeward action. Banter flew thick and fast, with some close calls sending a roar of approval through the crowd as they enjoyed the best harbour-side seat in the house.

Lake Macquarie Olympian Ben Lamb was thankful to get in some racing, saying that sailing the Force 24s was a great way to mix things up after the disappointing forecast.

TP52 fleet manager Terry Whetton agreed: “Full credit to Newcastle Cruising Yacht Club for helping us pull this together. It has been a great couple of days. The racing has been fun, and the hospitality has been fantastic.”

Meanwhile, the Port Hunter 16-Foot Skiff Sailing Club’s annual Cock-of-the-Harbour race turned into carnage on the harbour as a 27-boat fleet was decimated.

It was survival of the fittest, not necessarily the fastest, as one by one the leading boats withdrew with damage while others simply retired. Crowing loudest at the finish, though, was the Port Hunter 16-Foot skiff Kilo, steered by Rob Flanagan with Anthony Johnson and Graham Roberson.

Port Hunter Sailing Secretary Arran Gore and crew Daniel Flood sailed the MG Scurvy Rascal into second place and, to use racing parlance, there was no third dividend. Even the VS Australian champion was unable to finish.

Last year’s winner, a Nacra F18 helmed by Lucy Nissen, lasted less than a minute as a broken bridle caused its rig to tumble backwards. Belmont skiff East Coast Marine, after some blistering 25-knot reaches, pulled out while leading as a crewman dislocated his thumb.

The other bad luck story of the day belonged to Dave Cullip’s Nacra 5.8 Business Time that capsized multiple times at the final mark and ended up on the rocks. Full credit, though, to the club’s junior Flying Ant sailors, who hung in grimly until the breeze topped 35 knots.

The TP52 Gold Cup is set to resume tomorrow, with the competition now wide open after Friday’s results. Inshore action will include the Newcastle Trophy race sailed out of Port Hunter, a Laser pub challenge where the winner receives his or her weight in beer, and a free TrySailing session. 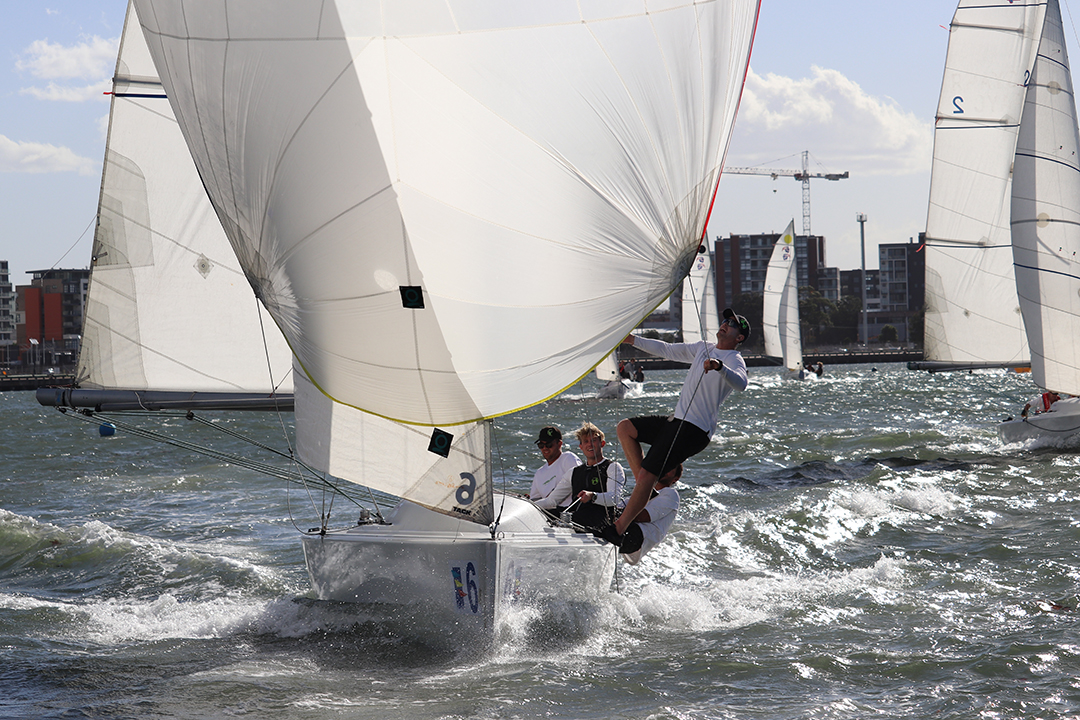